Signs of Fear in Your Dog You May Be Missing

If you were to ask people on the street how dogs “talk,” most of them would likely tell you that dogs use barking and other auditory signals to talk. While this is true to a small degree, the reality is that a dog’s chief means of expression is with its body. When it comes to communication, dogs are essentially the reverse of people. While people rely heavily on their words, and only use gestures and body language to add inflection and clarification, dogs “speak” using their bodies, while barking, whining, and other auditory cues are secondary. 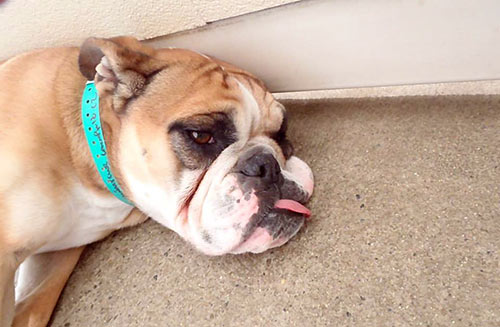 As a result, people often don’t understand what their dogs are telling them, especially when their dog is anxious or afraid. This is a serious issue, as unaddressed fearful behaviors can often escalate into aggressive and threatening behaviors and actions, such as snarling, charging, and biting. But if you can understand how your dog tells you when he’s scared and what he’s scared of, then you can address the situation and redirect your dog’s behaviors into safer and more positive ones.

The trick is to be able to recognize these signs and signals in the first place. Just about everybody can recognize the more commonly known ways a dog shows fear, such as whining, trembling and cowering, and hiding its tail between its legs. However, there are many other ways that a dog may show fear, that are easy to miss. To assist you in recognizing these subtle signals, here are a few lesser known ways that your dog may use to show he’s afraid.

Many people think that a restless dog just needs a walk or a trip to the beach to work off some energy. However, repeated pacing may actually signify that your dog is in a heightened state of alert, due to the presence of a trigger that it associates with danger. In this respect, they’re much like people—if there was something scary on your doorstep, wouldn’t you be restlessly pacing while you figured out what to do?

It’s quite common for dogs that are happy and excited to piddle on the floor. However, these can also be signs of a fight or flight response. The causes of fear-induced urination and defecation are still poorly understood, but the currently accepted hypothesis is that the digestion and processing of food and water require the expenditure of energy, and they can hinder mobility due to the added weight and bulk. As a result, when extremely stressed, an animal will spontaneously dump waste in order to prioritize more energy for fighting or fleeing.

If your dog is normally well housetrained, but starts making messes inside while you’re away, try and find a way to monitor your dog to see if something in the environment is triggering a fear response (this could also result from your dog experiencing anxiety and fear because he’s alone after you leave).

This one throws a lot of people off, because we tend to associate yawning with boredom. However, anxious dogs will often yawn in an exaggerated manner or obsessively lick their lips and nose when they are anxious. These are sometimes referred to as “calming signals,” because they are behaviors used to diffuse or redirect tension, either in themselves or in another dog. Other common calming signals are scratching, shaking, stretching, or repeatedly blinking. Obviously, it can be difficult to know when these are signs of fear or anxiety, versus when a dog is just doing its thing. However, it can help to think of it like a nervous tic. If someone scratches their arm once, then they probably have an itch. But if someone is constantly scratching their arm, whistling, looking around, and so on, then they are probably in a worried state of mind. The same goes for dogs as well.

Eating disorders in human beings often result from stress. This anxiety manifests itself very differently in different people—some people stress eat, while others completely lose their appetite or interest in food. Dogs work in much the same way. If your dog is relentlessly scarfing every bit of food it can find, or starts ignoring even the most succulent treat, then it’s likely preoccupied by an external stressor.

This is often the last thing a person sees a dog do before things go very bad. As a result, when recounting the aftermath of a dog attack, they exclaim, “But there was no warning at all! The dog was doing nothing, and then…” And that’s the thing. Dogs, like people, are always in motion to some degree when they’re awake. Even when they’re lying down, a dog’s ears will shift, its eyes will move, it will shift its weight and scratch and chew on itself.

This is why, if a dog is instead completely still and frozen, that your guard should immediately be up. You might ask, “Isn’t this a sign that a dog is angry, rather than scared?” But remember, fear and aggression both stem from the same thing—a perception of feeling vulnerable and threatened. And when a dog completely stiffens its body, this is often the signal that indicates that a breaking point has been reached, and the dog is about to embrace the philosophy that “the best defense is a good offense.”

Understanding a dog’s language is much like learning the language and social norms of a foreign culture—you have to discard your assumptions and build from the ground up. Dogs speak a different language, and while we can train them to understand ours, when they are stressed, they will always communicate using their own instinctive language. That’s why it’s important to be observant of your dog’s behavior, in order to understand how it’s relating to you and its environment at any given moment. That way, you can intervene when necessary.