Good Day Sacramento’s camera man Dave took the big step of enrolling family dog Shasta in The Local Bark’s Behavior Bootcamp because her behavior was becoming increasingly fearful and destructive. Dave hopes the mistakes he made when he first brought Shasta home from the shelter as a puppy - it turns out they were Common Mistakes will serve as a learning experience for others, so he is graciously allowing us to share her story and her progress.

The live segment on Good Day Sacramento in front of Dave’s house gives us just a glimpse of one-year-old Shasta’s fearful behavior. More distressing, however, is what we saw when Dave brought her to The Local Bark for an evaluation before enrolling in Bootcamp, which can be seen at the end of the video. Shasta was so frightened of being in a new environment, she pancaked in the parking lot and had to be carried through the front doors. Thankfully, however, Shasta - still tentative but at least walking - got through the doors on her own when she arrived for Bootcamp.

The first few days of Behavior Bootcamp look different for every dog and can be the toughest part of the whole rehab process. Most of the time, dogs like Shasta – fearful, anxious – need some time to simply decompress. This usually means they are crated in an area where they can see what’s going on, but don’t have to participate. This could take one day or five days, depending on the dog. What trainers watch for during this time are signs of stress in the dog, and the dog’s willingness to take part in interactions with humans or other dogs. 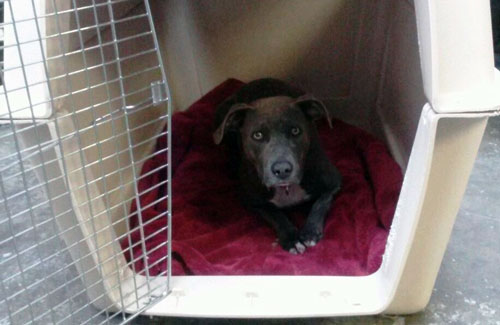 For dogs like Shasta, the slightest change in environment can be stressful. Even for well-adjusted dogs, being someplace new, surrounded by new people, sounds, and smells, can cause a dog to undergo stress. Change is stressful. Period. One of the most common signs of stress we see in anxious dogs, whether they’re dogs in Bootcamp or dogs in their own homes, is the lack of desire to eat. Unlike some of us humans who find comfort from food during stressful times, dogs are not “emotional eaters”. When they are distracted by a new environment - whether it’s Bootcamp, boarding while their owners are on vacation, or being home alone with a pet sitter – dogs will forego food. And Shasta proved to be no different.

We were pleasantly surprised when Shasta first arrived at Bootcamp because she was easily led into a crate* in the training room. After a couple hours of her watching the comings and goings of other dogs and trainers, she willingly came out. This was a big step.

*Side note: Dave had the “cage” vs. “condo” viewpoint on a crate. He neglected to use a crate when he brought Shasta home as a pup from the shelter because he felt like it would remind her of “being in a box” (a box being the container in which she was originally found as a puppy). Turns out a crate is just the protection Shasta – and lots of dogs – needed to feel safe taking in her surroundings. It’s her very own comfy condo. Shasta prefers the closed-sided plastic type of crate vs. a more open wire crate, most likely because she feels more protected.

At this point, trainers will often introduce food or treats to see where a dog’s head is at. Happy-go-lucky dogs will respond to food and we can start using it as a reinforcer in training. Although Shasta readily exited the safety of her crate, and even initiated contact with a new person, she wasn’t the least bit interested in food or treats. In fact, Shasta turned her nose up at food for a couple of days. Again, not uncommon for dogs undergoing a change in environment. Shasta was showing no signs of illness, so no worries. We knew that once the adrenaline in her system started declining, she’d feel hungry, and we’d be there as the Pez Dispensers of goodness.

Like a typical people-loving pit bull, Shasta bonded very quickly to trainer and owner of The Local Bark, Kristin Minnie. This can be a good thing, but we have to make sure that Shasta doesn’t “hyper bond,” something anxious dogs often do, and a Common Mistake people make in nurturing. We want Shasta to also bond with the other trainers and staff. Remember, we’re working on helping Shasta’s ability to meet new people without being fearful.