Awwww…like you’d expect, it was a heart-warming reunion for Shasta and her owner, Good Day Sacramento’s photographer Dave Grashoff. It’s been over a month since Dave dropped Shasta off at The Local Bark for Behavior Bootcamp so she could get some help with her fear-based behavior that was starting to escalate at home.

Shasta blossomed under the tutelage of her new BFF and mentor dog, Goose. We human trainers were able to help Shasta in a lot of ways, but Goose made great strides in helping Shasta with her confidence issues. How? By just being the secure guy he is. His mere presence, combined with Shasta’s competitive edge (who knew?), allowed Shasta to forget herself and surprise us all by running up agility ramps, through agility tunnels, and jumping into a wading pool full of balls – all things she balked at when first arriving in Bootcamp. Check out the video below to see her in action!

One of the coolest things about Shasta’s newfound confidence is now she can be a mentor dog. Just last week Shasta helped the newest Bootcamper, a sweet little pit bull named Pink, come out of her shell. Pink had been recently rescued by a family and her experience with other dogs was unknown to them. She had clearly been a mama dog at one point, but she appeared to be a little uptight around dogs (perhaps her interactions with them had been mostly focused on reproduction…poor girl). But after just a few minutes, Shasta clearly felt comfortable enough with her to initiate play, and Pink responded in kind. Woo hoo! 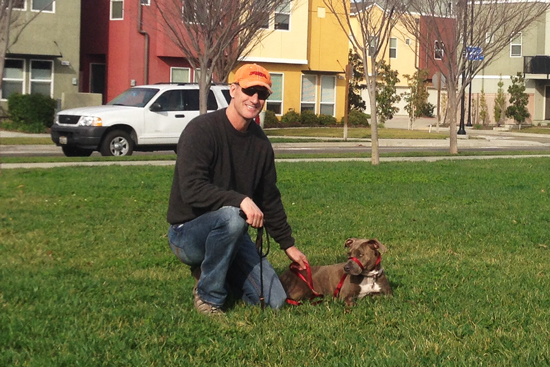 Now is when the rubber hits the road. Although Shasta learned a TON in Bootcamp – obedience, confidence, social skills – the responsibility now rests squarely on owner Dave’s shoulders. No pressure, Dave. We’ll be working with Dave to help establish structure and boundaries at home, and showing him how to help Shasta continue to learn how to cope with the world around her. Let’s be clear: Shasta is not a “new” dog. Bootcamp – nor any training program on the planet – can turn back time and reverse the experiences (or lack thereof) Shasta had (and didn’t have) in puppyhood. But like any rehab program, newfound skills help establish new ways of thinking and coping. The more practice Shasta gets, the better she’ll become.

Next time, we’ll check in with Shasta at home to see how she and Dave are doing.