As you’ve heard, Shasta, the dog belonging to Good Day Sacramento cameraman Dave, is in Behavior Bootcamp at The Local Bark getting help with her fear and anxiety with experiencing new people, places and things. These fears are at the root of many of the undesirable behaviors Shasta exhibits in her home (destructive behavior, charging people and dogs on leash) and the reason Dave reached out for help.
Shasta has successfully moved through her decompression period in Bootcamp and, after a couple days of choosing not to eat (see previous article about why dogs sometimes forego food in stressful situations) she’s eating meals and taking treats. This significant milestone is allowing us to start the important process of helping Shasta learn new ways of responding to things that normally stress her out.
After five days at The Local Bark, owner and trainer Kristin Minnie determined that Shasta would benefit from a weekend getaway at the Minnie’s home, where the new environment and normal comings-and-goings of a family complete with kids, cats and dogs, would provide the safe challenges Shasta needed to continue her rehab.
Kristin maintained the all-important structure Shasta needed to keep feeling safe and to stay on track. This meant when Shasta was in the house, she was confined to an area where she could observe the comings and goings of Kristin’s family and three dogs that would serve as mentors. This also meant she would be unable to act on her impulse to chase the cats, important in helping keep Shasta’s already-high adrenaline from climbing even higher. 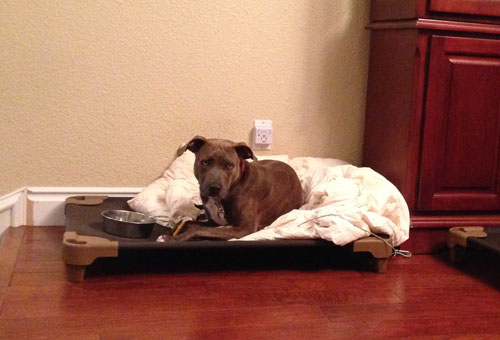 All the humans in the household knew not to approach Shasta, but to let her initiate contact on her terms. This is extremely important for fearful dogs. The “mentor” dogs did what balanced, social dogs do: respected Shasta’s space, but let her know they were up for some friendly merrymaking if she was.  Turns out she was. In a big way. Shasta’s favorite activity was when she was able to have off-leash playtime with the other dogs in the fenced-in area on Kristin’s property. This is where you really get to see her relax and have fun.
She joined Goose the German shepherd down at the creek and, after a brief pause at the edge, happily and confidently followed him into the water. 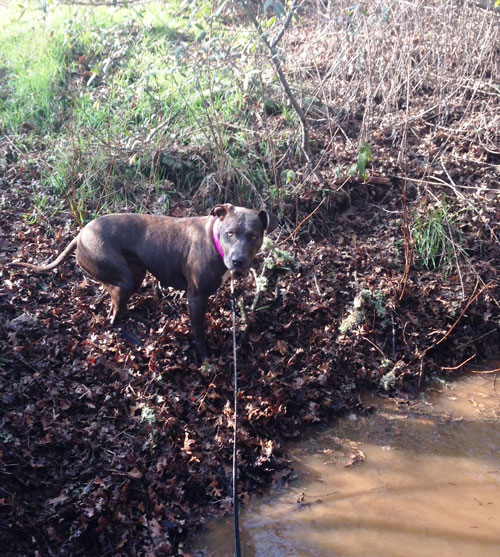 These experiences were ideal in helping Shasta get into a more comfortable mindset when it came time to go back into the house and the confines of a new environment that would typically be stressful for her. Not only did Kristin’s dogs mentor Shasta through normal social interactions outside, but Kristin, her husband and three children interacted with the dogs indoors, where Shasta could watch and hopefully begin to realize that the environment and the people in it were safe. An “if it’s good enough for them, it’s good enough for me” way of thinking.
Shasta did ultimately approach Kristin’s family members after a time to smell them, not –
as we often want to think – seek attention. Reaching out to pet a fearful dog at this point, even simply making eye contact with it, can be frightening for the dog. Shasta proved this point. When Kristin’s young daughter tried to pet her, Shasta slunk down to the floor; unmistakable dog-speak for “please leave me alone”.
Kristin also took Shasta on a group walk with her dogs through their neighborhood where Shasta proved to be quite the puller on leash. We’ll need to work on that. Not just for the sake of being a polite leash-walker, but when a dog is taught to exercise the impulse to pull (a very normal impulse for dogs), the dog is having to work. And a working dog is focused on the task at hand, not thinking about all the potentially “scary” things in the environment. 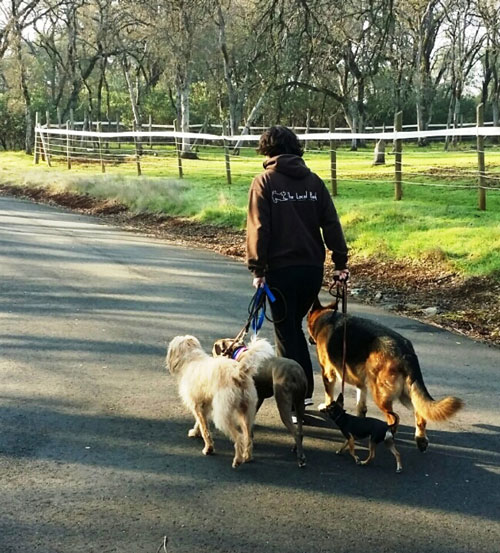 For now, however, Kristin keeps Shasta double-leashed on walks. Even though Shasta is bonding with the new people and dogs, she still gets frightened of unpredictable happenings in the environment, like when a car suddenly appears from around the corner, or a breeze causes an empty bag to blow across the street. And if she were to wig out and back out of her collar, she’d take off. This is sadly how many dogs get away from their owners: a burst of adrenaline-creating fear during a thunderstorm or Fourth of July fireworks gives them super-dog strength to jump the fence or yank the leash out of their owner’s hands.
So while Shasta does show improvement in certain situations, her rehabilitation is a work in progress.
Next time: Girl about town