One of the main reasons Shasta’s owner, Good Day Sacramento’s camera man Dave, sought help for Shasta was her increasingly fearful behavior toward people and other dogs in public. Shasta’s insecurity, which we know stems partly from lack of leadership in other areas of her life, causes her to charge after people and dogs walking by. She has not developed the skills, nor had ample opportunity, to practice successful meet-and-greets. Enter mentor dogs.

Shasta’s new buddies from The Local Bark take their work as mentor dogs very seriously. They are totally on board with the tasks required of them: meet new people, get some treats, watch a little traffic, keep it together when passing another dog on the sidewalk. You know, normal dog status. Shasta needs a role model in this life skill and as fabulous as we humans are, we ain’t as good as dogs at teaching other dogs.

Shasta actually lives with another dog, a loving, happy-go-lucky type named Shadow. But unfortunately, Shadow picked up on Shasta’s insecurity in public and has started taking on the role as her protector. Thinking it was her job, Shadow got into an uncharacteristic squabble with the neighbor’s dog that ended up having to make a trip to the vet for some stitches. A dog like Shadow doesn’t really want a gig like that. The pay isn’t good and the working conditions are stressful. So now both of Dave’s dogs are struggling.

Jake, one of Kristin Minnie’s dogs, is the ideal mentor for Shasta because he’s up for anything. Take him on a walk and his tail never stops wagging. Whether waiting at the crosswalk for a dual-exhaust muscle car to pass, or walking by a pack of barkyChihuahuas(bless their little Napoleon-complex hearts), Jake is unflappable. And people? LOVES ‘em. He’ll offer up a bunch of cute tricks to complete strangers if he thinks there might be some morsel of goodness in the deal. Just having Shasta around Jake while out in public is therapy. She can sense that he’s relaxed. And there’s no mistaking that happy tail, wagging right in her face.

While we have Shasta and Jake out in public, our job is to carefully and gradually introduce Shasta to things that might normally freak her out. But we don’t want to push too hard. A productive outing looks something like this: we go for a walk in a public area, like an outdoor retail center where we have plenty of room to maneuver. Shasta needs to feel like she has space – an escape route, if you will – so we avoid putting ourselves in a position where Shasta might get nervous and feel stuck. After we’ve done some walking, and if Shasta doesn’t appear too nervous, we might sit with her and Jake on a bench outside of Starbucks to take it all in. Not during the morning rush, but maybe during the after-workout-coffee scene. Perhaps a woman approaches with a “oh my gosh cute dogs!” face and we invite her to pet Jake and give him a treat. We explain that Shasta’s a little nervous, and it’s super helpful to just ignore her. So while nice lady loves up on Jake, Shasta has the opportunity to sneak in a few sniffs of the lady’s feet. We give Shasta a treat, lady walks away, and voila! A successful interaction. Then we repeat this a bunch of times, being careful to end the outing on a positive note. 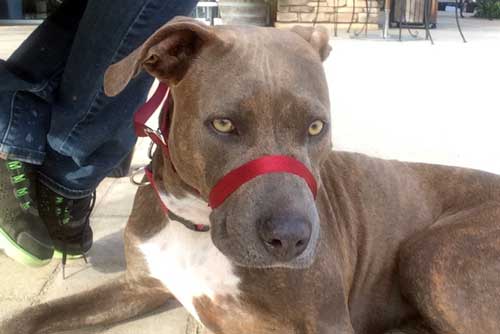 One of Shasta’s fears is a common one: men. Many dogs are afraid of men. Oftentimes this is due to their lack of socialization to them. Despite what they tried to make us believe in the 80s, men and women are different. Smells, body language, size, voice timbre, tendency to make direct eye contact, facial hair (weird to a dog that’s never seen that)…lots of things make men different. So while Shasta’s learning that strangers don’t always mean danger, we’re supplementing outings with some man-walks. Presley, the facilities (man)ager at The Local Bark, has been taking Shasta out on leisurely strolls to help de-sensitize her to the whole man thing. Of course, Presley knows better than to lean over Shasta, reach out for her, make direct eye contact with her, all the things that can make a dog nervous. He can casually slip her a treat from the side, or leave one on the ground, which, after a few walks, she started to take.

Between mentor dogs, public outings, and gradual exposure, Shasta is tail-deep in rehab. She’s making progress, and we are enjoying the heck out of her. We know Dave misses her, but he’s putting Shasta’s needs before his own: the hallmark of a good leader.

Next time: On-camera check-in with Shasta