It’s Shasta’s 4th week in Behavior Bootcamp and we are at our favorite time in the rehab process – confidence building with fun and games. When the time comes for Shasta to return home to Good Day Sacramento’s cameraman Dave, we want to be able to give Dave a list of things he can do to help Shasta in situations that might normally be scary for her. (Remember, Shasta is in Bootcamp because her fearfulness was driving her to act out toward people and dogs, and her anxiety was contributing to destructive chewing around the house.) 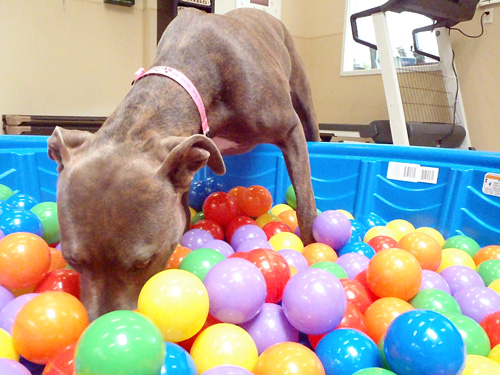 In this period of training we’re doing a lot of what’s called “behavior shaping” with the clicker. We’re not gonna get all behavior-sciency on you, but hang in here for just a moment. Clicker training is a part of our methodology in teaching every dog that comes through our doors, but it is extremely helpful in cases like Shasta’s. In short, the dog learns in just a couple training sessions (seriously…in like 20 minutes total) that the sound of the click means she’s going to get a reward. We use the click to mark the behavior we want. Basically we’re saying Yes! That’s it! when we click. So a clicker-savvy dog, which Shasta now is, starts working for that click. And because we’re listening to Shasta – she’s telling us what motivates her, what makes that “click” more important than, say, freaking out about the dude that just walked by the window – we’re discovering what truly motivates her.

Turns out Shasta loves herself a good game of tug. When she’s pulling on that tug toy, she’s not as concerned about the facility manager walking in and out of the room (the mere appearance of someone new in the room used to freak her out). And with tug, we incorporate rules – “take it” and “drop it” – so there are a couple more things Shasta has to think about. For Shasta, tug trumps chicken in a chaotic environment.

We’re also teaching Shasta to “touch” a hand (target training). We’re hoping Dave can pull this one out when they are out in public if Shasta gets stuck. “Touch” can easily be transferred to “say hi” or “high five” which are great foundation behaviors (slipped in a behavior science word there…sorry) for dogs that are anxious about meeting new people. 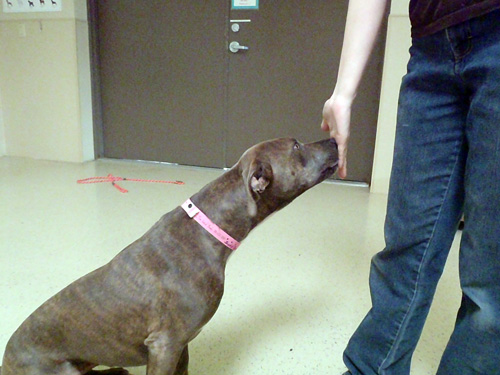 Not only is Shasta having fun, but we’re having a blast watching her use her brain to try and figure out how to get that click. We have high hopes that Dave will prove to be as smart as his girl Shasta and we can get him up and running with the clicker.

Next time: who knows…Shasta will decide.