Finding Substitute Behaviors for Your Dog's Bad Habits: How to Deal With Excitement and Distractions - Part 1 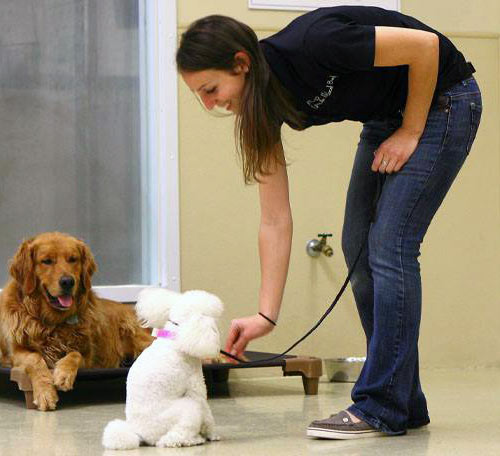 People love the word “no.” It’s one of the first words that we pick up in infancy, which says a lot about how human beings react to unwanted behavior. When we see someone doing something we don’t like, we don’t even have to stop and think: out pops “NO!” But the reality is, with our pups (and kids), it’s just about impossible to shut down the impulses that lead to unwanted behavior (and managing to do so almost certainly guarantees causing serious psychological trauma in the process). The uselessness of the much-loved “No Technique” should be pretty obvious, given the exhausted sense of failure you feel as you catch yourself saying it for the thousandth time. And stubbornly clinging to the word “no” for any and all situations will only reinforce to your dog that the word is meaningless. One of the trainers here at Local Bark often says, “You don’t want your dog’s day to be a sea of ‘no’s.’”

If you tend to use the word “no” a lot, the best solution is to force yourself to dump the word from your vocabulary. You have to retrain yourself and how you interact with your dog. A goal to shoot for would be to have “no” actually mean something to your dog. One example would be to say “no” if your dog is about to get him or herself in trouble. But it really is important to get yourself out of the habit of just using “no” for any and all situations.

Dogs are just chock full of doggy impulses, because (surprise!) they’re dogs. And dogs are wired so that their impulses quickly trigger preprogrammed behaviors. You can’t delete these impulses. But what you can do is rewire your dog’s reaction to problematic impulses, so that they instead react in a safe or socially acceptable manner. Teaching your dog a negative response (“Don’t do this”) is MUCH more difficult than teaching your dog a different response (“When this happens, do this instead.”).

To get you started, here are a few common situations that arise for all dog owners, and the replacement behaviors you can instill in your pup in order to avoid problematic behaviors. We don't want to give you too much to work on at once, so we'll begin with two situations in today's blog post, and then give you a little bit of a break before we address a couple more situations in a second blog post.

Instead of jumping on people, teach your dog to: “Sit.”

While the use of a “sit” command may seem incredibly obvious, we wanted to bring it up specifically because in most situations, “sit” will not work, because it does nothing to address the dog’s needs or concerns. Trying to teach a dog to “sit” instead of barking at a strange dog isn’t going to work, because your dog is going to continue to feel threatened as long as his or her physical proximity to the strange dog doesn’t change.

However, in the case of a dog that jumps on people, chances are that the dog is craving attention. It’s an excitement-related behavior. They want to be engaged physically and verbally. We often advise owners to ignore their dog completely when initially walking in the door. If you greet your with a squeal and make a big deal of it, you’re setting your dog up for failure.

The intention isn’t to strip away all of your dog’s happiness at your return. But it’s important for your dog to not associate people with excitement, which is when you see a breakdown in appropriate behaviors. It’s okay to make your dog wait a little bit before giving him the satisfaction he craves. You want to give him that affection on your terms.  And in order for your dog to be in a state where he or she can appropriately pay attention and be trained, you need to ignore your pup until it is calm. Then you can reciprocate that calmness with affection.

That’s why teaching your dog to “sit” instead works great, as long as the command is followed up with a scratch on the head, petting, or kneeling down for a face-to-face nuzzle. Because the modified behavior (running up and sitting in front of you, rather than running up and jumping on you) produces the desired response (positive attention), the dog will readily learn the modified behavior.

Instead of playfully chewing or biting on people or items, teach your dog to: “Fetch,” or “Get your toy!”

By nature, when a puppy’s emotional state becomes wound up or overly energetic, it responds by finding a physically demanding activity. In the wild, this typically isn’t a problem, because all there is to chew or jump on are litter mates, or nearby sticks and plants. In your house, however, chances are that you don’t want your pup to use your new pair of slippers as an outlet. So when you see your dog getting frisky and eyeballing your living room loafers, get down on the floor and toss a favorite toy across the room. This will redirect your dog’s attention from what you don’t want him to fixate on (your loafers), while at the same time teaching him a response (grabbing a toy and bringing it to you) that informs you as to what he needs (playtime). This is actually fairly similar to teaching a dog to run to the back door when they need to go to the bathroom. In the process of redirecting the old impulse, the new impulse actually serves as a means of communicating what your dog needs. And because you then act to satisfy your dog’s need (to play, or to let it out to go potty), that modified behavior is reinforced.

Be sure to come back on Thursday for the conclusion to our discussion about finding substitute behaviors for your dog.